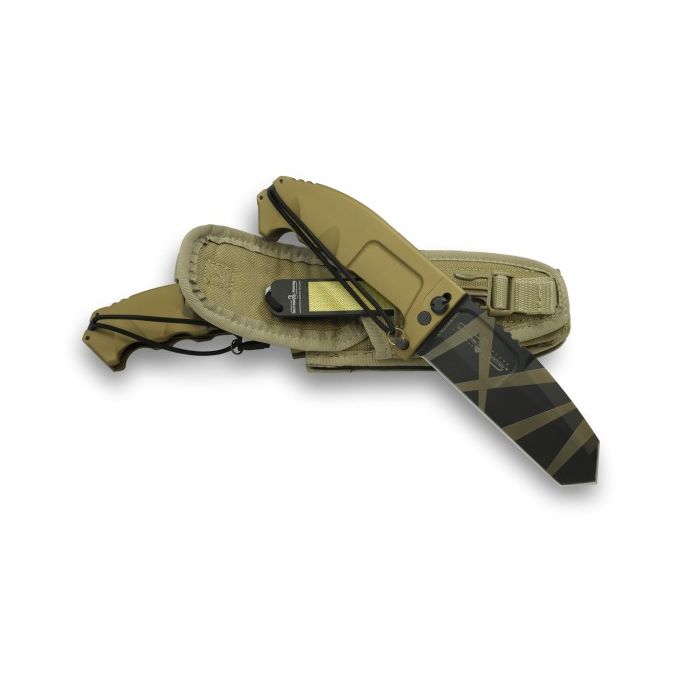 Ga naar het begin van de afbeeldingen-gallerij
Gegevens
In June 2006, the “185° Rgt, Ricognizione e Acquisizione Obiettivi” (Target Acquisition Regiment) airborne “FOLGORE” (185° RAO) entrusted to Extrema Ratio the development of a unique knife fitting the unit’s specific operational duties, This resulted in the RAO: not an oversized folder as much as a compact survival & field knife, with a heavy and dependable blade, Its very reliable locking system, assisted by an extra safety device, effectively turns this folder into a fixed blade knife, The opening and closing is to be performed with both hands in order to minimize the risk of self-inflicted injuries, as the blade, because of its weight, is a veritable guillotine, The extra safe device is a steel pin to be hand-screwed through two holes by the guard section of the massive Anticorodal aluminum handle – its presence between blade and hand also acting as a great psychological boon, The sheath is an essential part of this weapon system: it holds a diamond-plate sharpener and enables user to carry the knife either in open position, held in place by a cord and two clips, or closed, inside the front pocket, The sheath can be attached to tactical vests or common belts, being MOLLE system-compliant, Available versions: RAO BLACK, RAO BLACK RUVIDO, RAO DESERT WARFARE,
Reviews
Schrijf uw eigen review
To Top