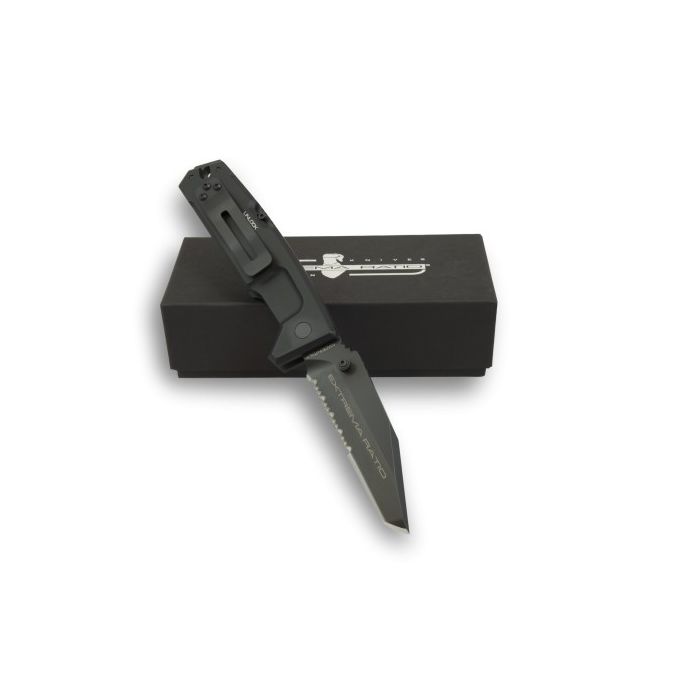 Ga naar het begin van de afbeeldingen-gallerij
Gegevens
This model is the evolution of the FULCRUM Folder (out of production since 2005), the first folding knife produced by Extrema Ratio according to the specifics of an Italian counter-terrorism unit, The FULCRUM II is basically identical to its predecessor, the only variations being the addition of a reversible clip and a partially lowered surface on the handle which improves the ergonomics and makes operating the opening pin easier, A manual security lock holds the BACK-LOCK mechanism lever, preventing accidental unlocking of the blade block during heavy-duty use, It can also be used to lock the knife closed in the event it’s taken away from the user: then the FULCRUM cannot be opened, even if the mechanism is often irrevocably damaged, The back of the flat-ground blade offers a comfortable resting point for the thumb, The tempered steel tang can be used as glass breaker and is provided with a hole to affix a security cord, Available versions: FULCRUM II D BLACK, FULCRUM II D DESERT WARFARE, FULCRUM II D BLACK RUVIDO, FULCRUM II T BLACK, FULCRUM II T DESERT WARFARE, FULCRUM II T BLACK RUVIDO,
Reviews
Schrijf uw eigen review
To Top