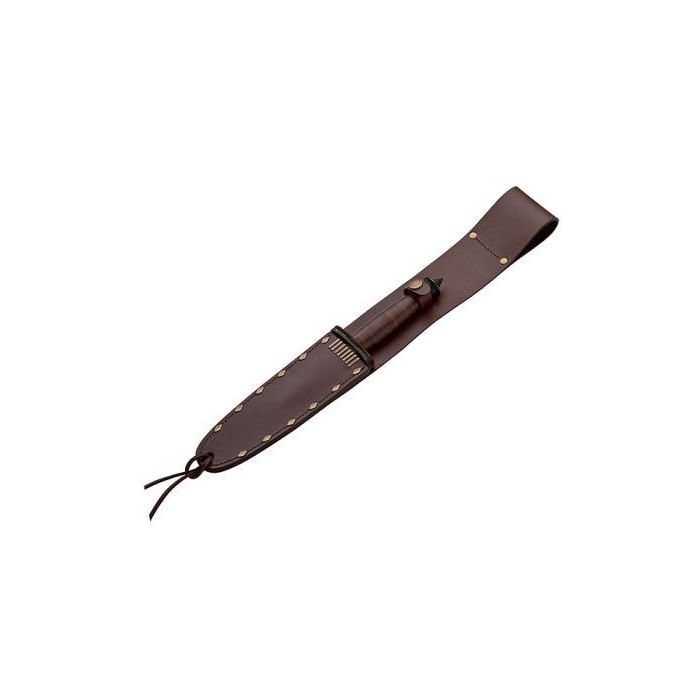 Ga naar het begin van de afbeeldingen-gallerij
Gegevens
evil's Brigade originated in July of 1942. Under the official title, 1st Special Service Force, American and Canadian soldiers were combined together to form a special task force trained for battle behind enemy lines. The origin of many special units can be traced back to this special force. Due to numerous nocternal operations where all faces were blackened for camouflage, the German Wehrmacht invented their nickname, "Black Devils," which bore witness of the great respect they had of their enemy, although their unit was relatively small. In 1943 and 1944, the 1st SSF successfully completed many operations in Italy and France, impacting military operations. An important piece of equipment of the Devil's Brigade was the specially designed V-42 combat knife, which was also part of the intensive close combat training. The handle of compressed leather discs ends in a pointed impact cap. A thick leather padding underneath the slightly curved pommel offered protection from injury. The double-edged blade of the dagger features a corrugated thumb rest for a secure grip. To this day, the crest of the Special Forces of the U.S. Army adorns this legendary dagger. We not only deliver this exclusive collector's item with its classic leather sheath, but also with a replica of the cloth insignia of the unit, which is the red spearhead, and with a reproduction of the original German sticker with the words "The worst is yet to come!", which was stuck behind enemy lines in order to demoralize the enemy. A premium collector's ensemble, especially ideal for aficionados of military history!
Reviews
Schrijf uw eigen review
To Top